Next national park I had never seen and what promised to be a fun stop on my rambling route is Death Valley, site of that 20 mule team Borax childhood memory. What boomer could forget that 1940 western 20 Mule Team starring Wallace Beery as Skinner Bill. Or the TV show Death Valley Days (1952-1970) starring none other than Ronald Reagan. So you can bet my expectations were high.

What also got me chompin’ at the bit was where I was booked to stay… Literally right on the CA-NV border (on the Nevada side) at the Longstreet Inn, Casino and RV Park.  I had visions of blackjack after breakfast, slots and shots the rest of the day.  After a wild drive over secondary roads through the heart of the Mohave Desert, past giant sand dunes, vast military bases and the world’s largest thermometer I arrived and parked in the spot furthest from the casino with the Funeral Mountains jagged against the western horizon (a fitting range to border Death Valley).  Here’s a few picks from my trip and home….

Most people enter Death Valley from one of the main paved highways leading into the park…. not me.  I decided to cast caution to the wind and check out this one-way four-wheel road marked on the map through Titus Canyon.  Wow.  The wildness and multicolored hills were breathtaking.  My truck handled it well but I did get nervous when the track led into a narrow slot-like canyon with only a foot between my dually tires and the walls.  I kept from painting the rocks iridium metallic and exited into the vast landscape of Death Valley. 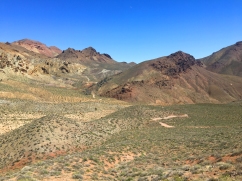 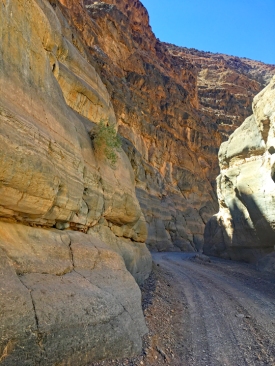 No super bloom this year although they did get a lot of precip last winter.  The wildflowers were sparse but none-the-less amazing. Stopped into the visitor center where the thermometer read 95 degrees (20 degrees hotter than when I started). Hell with spring, welcome to summer.  Checked out Zabriskie Point (wasn’t that a 1970’s counter culture film with music from Pink Floyd and Jerry Garcia?) and took way too many photos. Then it was back through Twenty Mule Team Canyon to Big Mo.  Tonight is steak dinner time at Longstreet’s Nebraska Steakhouse (not all that bad). After my rib eye it was down to the slots where I proceeded to kill it. A group of Swedes gathered around and OOO’d and AWWW’d while I lit it up. Ended up paying for dinner, drinks and tomorrow’s breakfast with my winnings! 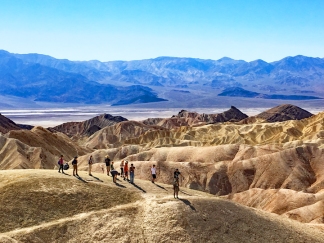 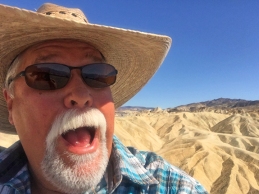 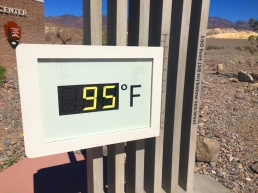 One of the coolest things about this road trip adventure is finding stuff you had no idea ever existed.  How could I have known that the entrance to Ash Meadows National Wildlife Refuge was just 1 mile up the road.  Ash Meadows (according to the flier) has the greatest concentration of endemic life in all of the U.S.A.!  A system of boardwalks lead to Caribbean-colored springs bubbling up from the desert. No one else was there. The cactus flowers were orgasmic.  But speaking of orgasmic…. just a little way down the road was a monument to Area 51 (where aliens crash landed). Not a monument of stone mind you, but a must-see roadside attraction, the Area 51 Alien Travel Center and Cathouse. A bordello with not-from-this-world hostesses.  I just took pictures having an aversion to green-skinned ladies. 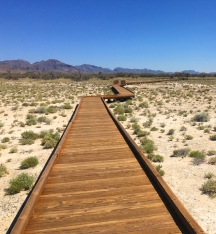 Time for one more daylong visit to Death Valley. For anyone traveling from the east or south, you must stop for breakfast at the Amargosa Cafe and Opera House in Death Valley Junction, CA.  Great breakfast and a bit of weird local history. Took a new route into the park today – Rt 178 from Shoshone, past mill ruins, Badwater (lowest point in North America at 282′ below sea level), the Natural Bridge, Devil’s Golf Course and Artists Palette (some of the most colorful rocks and hills in the park).  After a drive through Mustard Canyon (the rocks look like they are covered in French’s and Gulden’s) I exited via Daylight Pass and explored the mining ghost town of Rhyolite.  Some big deal back at the turn of last century.  Cool way to wrap up an active two weeks. Now it’s on to St George, Cedar City, Zion and Bryce Canyon NP.  May be another few weeks until I post a report. 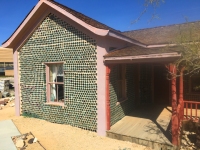 If you want a treat – click on each photo group for bigger versions!

WHO: Dave Wiggins
WHAT: Tales of life on the road
WHERE: We'll let the road decide
WHEN: Now until it's over
WHY: Life needs to be an adventure
HOW: Pack up my 43-foot 5th wheel with all I own and hook it up to a bruiser 1-ton GMC pick-up and GO!
RETIRING? No... just retreading.

Where I’m Headed Next